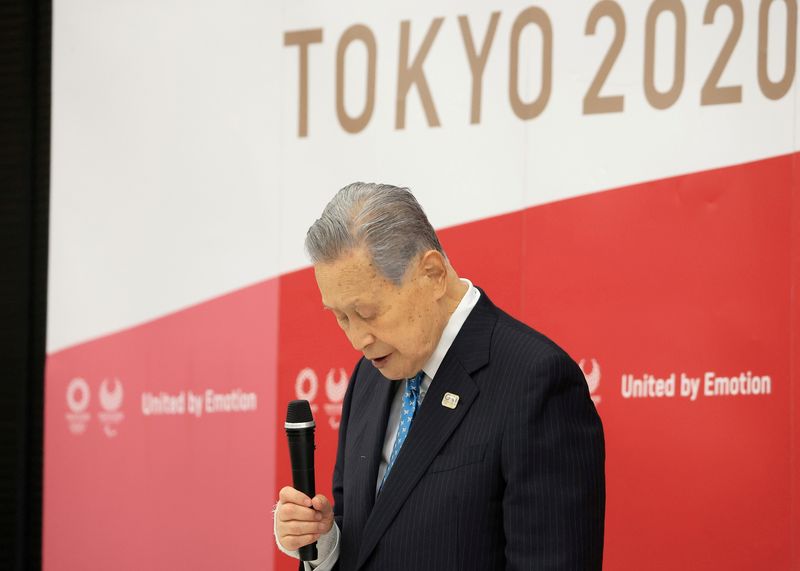 FILE PHOTO: Tokyo 2020 Olympics organizing committee president Yoshiro Mori announces his resignation as he takes responsibility for his sexist comments at a meeting with council and executive board members at the committee headquarters, in Tokyo, Japan February 12, 2021. Yoshikazu Tsuno/Pool via REUTERS/File Photo/File Photo

TOKYO (Reuters) – Tokyo 2020 organisers added to speculation that scandal-hit former chief Yoshiro Mori could return as an honorary adviser on Saturday when they stopped short of dismissing a report about his comeback.

Moves are under way to name Mori an honorary supreme adviser of the organising committee, the Asahi newspaper said on Friday, quoting several sources.

The appointment would likely renew global outrage after Mori was forced to resign over sexist comments early this year.

“As for the positions of those who have contributed to the organisation of the Games, we will deal with them as necessary, but we can’t comment on any individual appointments,” Tokyo 2020 spokesman Masa Takaya told a news conference when asked about the report.

The octogenarian former prime minister, who has a long history of gaffes, stepped down https://www.reuters.com/article/us-olympics-2020-mori-resigns-idUSKBN2AB097 after his comments that women talk too much sparked a storm of global criticism on social media.

It was one of several scandals https://www.reuters.com/lifestyle/sports/tokyo-2020-plagued-by-embarrassing-scandals-gaffes-2021-07-22 to plague organisers and put a sharp focus on social issues like gender equality in male-dominated Japan.

Mori’s return could erode the goodwill earned by organisers with there choice of tennis superstar Naomi Osaka to light the Olympic cauldron on Friday.

The selection of Osaka, the daughter of a Haitian man and a Japanese woman, reflects the changes and slowly growing diversity coming to a once ethnically homogeneous country.

This week, the director of the opening ceremony was fired on the eve of the event after a joke he made about the Holocaust in a 1990s comedy sketch resurfaced and sparked a public outcry.

Days earlier, the ceremony’s composer stepped down after comments he made in interviews, also in the 1990s, about abusing and bullying classmates were circulated on social media.