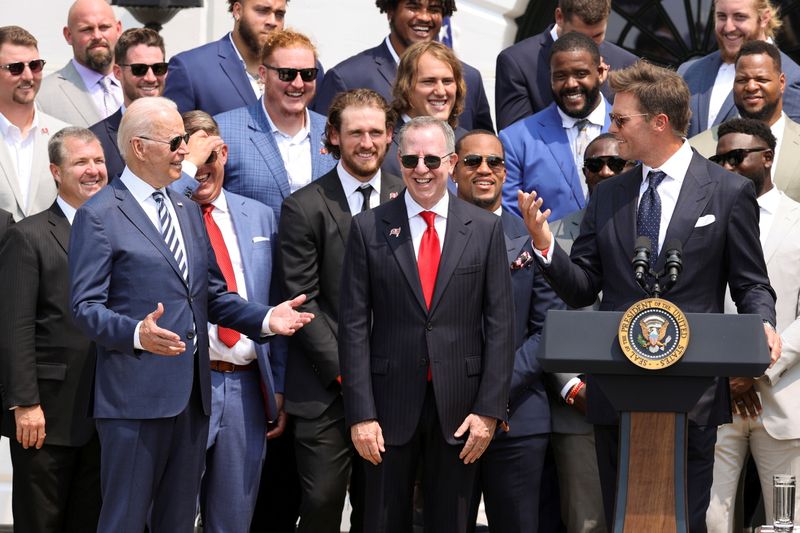 U.S. President Joe Biden reacts next to Buccaneers owner Bryan Glazer and quarterback Tom Brady as the president welcomes members of the NFL Super Bowl champion Tampa Bay Buccaneers to a reception on the South Lawn of the White House in Washington, U.S. July 20, 2021. REUTERS/Jonathan Ernst

By Nandita Bose and Steve Holland

The 43-year-old quarterback joined the rest of his Tampa Bay Buccaneers at the White House on Tuesday to celebrate their Super Bowl victory with President Joe Biden.

Wearing a dark suit and sunglasses, Brady stood nearby as Biden hailed the team that beat the Kansas City Chiefs in the Feb. 7 Super Bowl, his first with Tampa Bay after winning six for the New England Patriots.

Brady took to the lectern and joked about Trump’s baseless claims of voter fraud, which have convinced many Republicans that Biden did not win the election, and his description of Biden as “Sleepy Joe,” without mentioning Trump by name.

“We found our rhythm, we got on a roll,” Brady said. “Not a lot of people, you know, think that we could have won. About 40% of the people still don’t think we won.”

“I understand that,” said Biden to laughter.

“And personally, it’s nice for me to be back here. We had a game in Chicago where I forgot what down it was. I lost track of one down in 21 years of playing. And they started calling me ‘Sleepy Tom.’ Why would they do that to me?” the smiling Brady said to laughter.

The team gave Biden a Tampa Bay jersey emblazoned with the number 46, because Biden is the 46th president.

Brady has had an up-and-down friendship with Trump, reportedly supporting him for election in 2016 but disagreeing with his 2017 criticism https://reut.rs/3rvhSFu of NFL players for kneeling during the national anthem, among other issues.

The Bucs’ visit was the first time the reigning Super Bowl champs had been at the White House since 2017, as Biden pushes to unite America after a divisive election.

Edward Glazer, a co-chairman of the Buccaneers and a major fund-raiser for Trump, also attended the event.