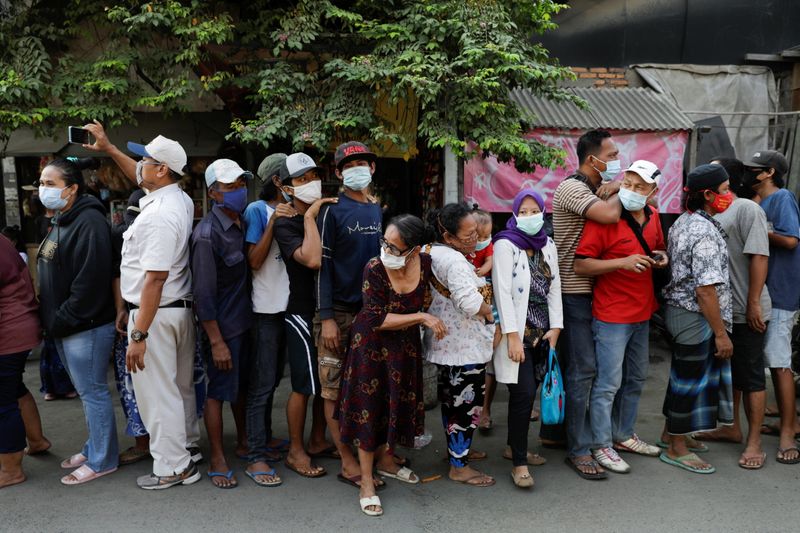 JAKARTA (Reuters) – Trust in Indonesian President Joko Widodo’s ability to handle the pandemic has fallen sharply among the public, a survey showed, as authorities struggle to contain a wave of coronavirus infections that has pushed hospitals to breaking point.

Fueled by the spread of the more virulent Delta variant, Indonesia has reported more new COVID-19 cases than any country in the world, according to the latest seven-day average from a Reuters data tracker. It was second only to Brazil in terms of the number of deaths.

The opinion poll by The Indonesian Survey Institute (LSI), which was conducted in late June before the worst of the current outbreak, showed trust that the president can handle the pandemic fell to 43% compared with 56.5% in a poll in February.

“Trust in the president’s ability to overcome the pandemic declined steeply in the past four months,” said Djayadi Hanan, LSI’s executive director, adding trust in the government was important to enforce programmes such as vaccinations and movement curbs.

The findings of the survey, which covered 1,200 respondents, showed overall trust in the president’s response still outweighed distrust with 22.6% not trusting his actions and 32% neutral.

Asked for comment on the survey, a spokesperson for the president said he has not studied the poll.

The government has faced criticism in some media of its handling of the pandemic with the Jakarta Post running an editorial on July 3 entitled “They did not have to die”, blaming a delay in bringing in restrictions for unnecessary deaths.

Meanwhile, the publication Tempo in an editorial on Monday said a denial of the gravity of the situation had prevented officials from taking the decisions to control the outbreak.

Elina Ciptadi, a risk communications specialist, said to win back trust the president should take on a direct role in communications to ensure uniform and fact-based messaging.

“If government officials all say it’s under control, but facts on the ground are that hospitals are overloaded and people get turned down, they lose credibility,” she said.

Indonesia imposed its strictest measures to contain the virus on July 3 and the government is considering whether to extend them when they expire on Tuesday.

Authorities have also called on people in the world’s largest Muslim-majority country not to gather in crowds to celebrate the Eid-Al-Adha festival on Tuesday, when Muslims slaughter animals and share the meat among family and the poor.