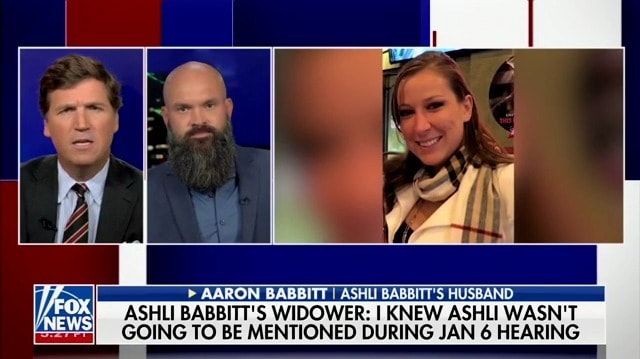 The night after Tucker Carlson falsely claimed that the death of Trump supporter Ashli Babbitt during the Jan. 6 Capitol riot was not investigated, the Fox host suggested that Babbitt was shot merely because she had the “wrong politics.”

Babbitt was shot and killed by a Capitol police officer as she attempted to breach the Speaker’s Lobby amid the violent attempted insurrection.

Carlson’s blatantly misleading characterization of her death occurred during an interview Friday with Babbitt’s widower, Aaron. Babbitt first mentioned how members of the House Jan. 6 committee didn’t bring up his wife’s death during Thursday’s hearing, and how committee member Rep. Adam Kinzinger (R-MI) has praised Lt. Michael Byrd, the officer who shot Babbitt and who was cleared of any wrongdoing. In response, Carlson was sympathetic.