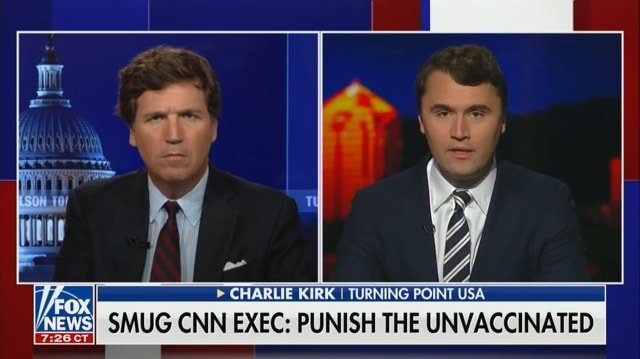 Amid his own network’s noticeable shift in urging viewers to get vaccinated, Fox News host Tucker Carlson smiled and laughed Wednesday night as Turning Point USA founder Charlie Kirk criticized the sudden influx of “virtue signaling” conservatives who are encouraging people to get their shots.

Prior to appearing on Carlson’s show, Kirk—who has a long history of peddling COVID-19 misinformation and vaccine skepticism—insanely speculated on his podcast that twice as many people have died after getting the COVID-19 vaccine than have died from the disease itself. Citing numbers in the CDC’s VAERS system, a database on vaccine adverse events that has become a breeding ground for anti-vax misinformation, Kirk took the number of deaths currently listed in the system and inexplicably claimed they may only account for 1 percent of total vaccine deaths, coming to a total of 1.2 million.

“I’m not saying that’s true,” he noted. “I’m saying that according to how we calculate VAERS by the independent study that was administered, this could be true.” The CDC itself states that reports of death to VAERS “do not necessarily mean that a vaccine caused a health problem.” Furthermore, the CDC has also said they’ve only confirmed three deaths have so far been linked to a COVID-19 vaccine, all from the Johnson & Johnson shot.

Carlson, who has also used VAERS to misleadingly allege that vaccines are causing thousands of deaths, brought on Kirk to talk about an internal email he accidentally received from a CNN executive that bemoaned the stagnating vaccination rates in the country. “As a channel, CNN should not have a position on whether you should take medicine or not, because it’s a news channel. It’s not a health station,” Carlson added.

(Interestingly, as Carlson criticizes CNN executives for thinking vaccination requirements may be necessary for businesses and schools, his own network has recently implemented a vaccine passport system for its employees.)

“Is it CNN’s position now that if someone decides to refuse to get the vaccine, like I have, that I’m going to come under some sort of punishment? What does that mean? What does the stick look like in CNN’s world?” Kirk wondered aloud, referring to a “carrot vs. stick” reference in the CNN exec’s email.

Carlson, meanwhile, grumbled that “a lot of” news channels are “speaking with this moral authority” about getting vaccinated. At the same time, he asked Kirk: “When did this become their role to do stuff like this?”

Kirk took that opportunity to blast his fellow conservatives for suddenly advocating for vaccines during a surge in COVID-19 hospitalizations among the unvaccinated.

“The other question is why all of a sudden in the last 48 hours has there been this almost coordinated effort of people on the establishment center-right kind of virtue signaling and telling every single person to get vaccinated,” he exclaimed as Carlson nodded and laughed.

Kirk went on to claim that he thinks there’s a “mission creep of certain institutions that think they are supposed to do things that they really aren’t,” stating that the email shows a “very disturbing” inside look into CNN.

Over the past few days, a number of Fox News anchors and personalities have made a concerted effort to openly encourage viewers to get vaccinated. On top of that, many of the network’s news shows have repeatedly shared an on-air graphic urging its audience to visit the federal government vaccine website.

The urging comes as daily new COVID cases have risen across the country, with the highly transmissible Delta variant now considered the dominant strain, prompting some jurisdictions to reimpose mask mandates. Experts have warned that in addition to the Delta variant causing more hospitalizations and deaths among the unvaccinated, the COVID-19 virus could once again mutate and produce a vaccine-resistant strain that could prove perilous to the entire population.