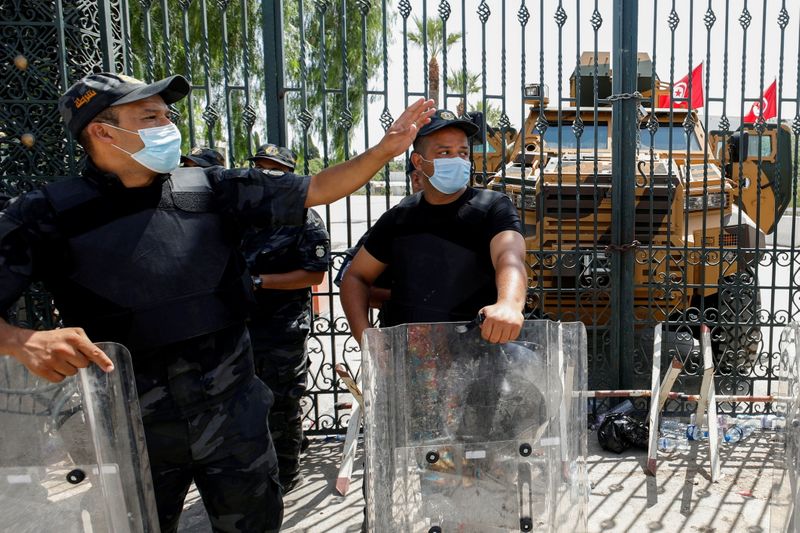 TUNIS (Reuters) – President Kais Saied’s decision to invoke Article 80 of the Tunisian constitution late on Sunday to freeze the activities of parliament and oust the prime minister was rapidly called a coup by his political foes.

The legality of his actions rests on rival interpretations of the article that were meant to be resolved by a judicial body that authorities have for years failed to set up.

Politicians and constitutional lawyers are now wrangling over whether Saied had any authority for his actions.

Successive presidents, prime ministers and parliaments have since then tussled over the extent of their legal powers and most big candidates in the 2019 elections, including Saied, vowed to change the system.

Crucially, all disputes were meant to be settled by a Constitutional Court agreed between the existing power centres. But after years of squabbling there has been no consensus on which judges should fill it.

Saied, a constitutional scholar who has been critical of the 2014 document, invoked the emergency powers given by Article 80 in a speech on Sunday.

The article says the president can take necessary measures in exceptional circumstances if imminent danger threatens national institutions, security or independence – a condition Saied said was triggered by protests and a COVID-19 spike.

It says any measures the president takes should guarantee a return to normal state functions and that though the president can freeze parliament’s activities, he cannot dissolve it.

However, the article says the president must consult with the prime minister and parliament speaker before invoking Article 80 and inform the constitutional court.

Parliament speaker Ghannouchi denied having been consulted. Prime Minister Hichem Mechichi has not spoken in public since Saied dismissed him, and the court has not been set up.

“In the absence of the constitutional court the president has the exclusive right of interpretation,” said Rabeh Kraifi, a law professor, arguing that Saied’s actions were legal.

“The decisions were completely contrary to the constitution … the condition of imminent danger does not exist and he did not consult the speaker or prime minister,” said another law professor, Iyadh Ben Achour.