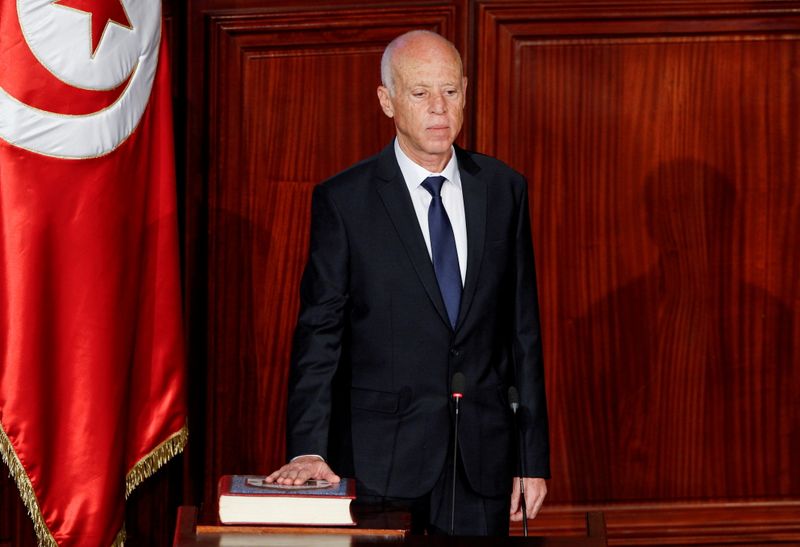 CAIRO (Reuters) – Tunisian President Kais Saied, who recently ousted parliament, responded to critics who called his actions a coup on Monday by telling them to “review your constitutional lessons.”

The president was also keen to reassure the business community saying: “we do not have any problems with businessmen,” shortly after credit ratings agency Fitch warned Tunisia would need to retain its reserves to avoid another rating downgrade.

Saied has framed his actions as a constitutional and popular response to years of economic and political paralysis, and said Article 80 of the constitution gave him power to dismiss the government, appoint a temporary administration, freeze parliament and lift the immunity of its members.

Tunisia’s nascent democracy is facing its worst crisis in a decade on Monday after Saied ousted the government and froze parliament with help from the army, a move denounced as a coup by the main parties including Islamists.

Saied called on Tunisians to remain calm and not to respond to any provocations. He also urged people not to take to the streets, saying “the most danger a nation can face is internal explosion.”

Earlier on Monday, Saied imposed a night curfew for a month and suspended work in central administrations, foreign institutions, local groups and public institutions of an administrative nature for two days, starting Tuesday, after people took to the streets between opponents and encouraging.

The Tunisian president stressed that he will take full responsibility for his latest decisions and that he does not want a single blood drop shed on Tunisian soil.