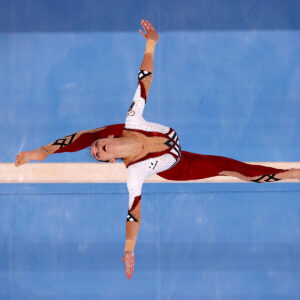 1. Olympians are speaking out about abortion pressure:

“I literally don’t know another female track athlete who hasn’t had an abortion,” Richards-Ross told Sports Illustrated Now. “And that’s sad.” She attributed the situation to misinformation circulating among peers on college campuses that pregnancy is impossible for women athletes who have lost their menstrual cycles due to extreme exercise.

Richards-Ross’s description of her thought process, that she had “no choice at all” and risked losing a lifetime of work if she continued her pregnancy, speaks to a culture around sports that encourages athletes to sacrifice and do “whatever it takes” to perform at the highest level. Indeed, her baby’s father, star NFL cornerback Aaron Ross, who is now her husband, couldn’t be with her when she visited the abortion clinic that day. “Nothing interrupted [Coach] Tom Coughlin’s [training] schedule for the Super Bowl champions. Nothing,” she wrote in her book.

“We must all ask ourselves if we can much longer afford the luxury and the sinfulness of our divisions.” #CardinalGeorge

5. Mindy Belz: A decade of destruction

Try telling Syrian mothers giving birth that the civil war there isn’t newsworthy. For some observers, the 10-year conflict has fallen off the radar. But at a hospital in the city of Afrin, those who weren’t killed after rocket fire destroyed a labor-and-delivery unit struggle to survive.

4. Nigerian seminarian calls for ‘prayer backed up with action’ to counter violence

In an abandoned mall on the outskirts of Beirut, an image of St. Thérèse of Lisieux hangs in the window of what was once a storefront. This former clothing store now serves as home for Christian refugees who have been hit hard by the inflation caused by Lebanon’s severe economic depression.

6. After Two Statues at Our Lady of Mercy Were Destroyed, NYPD Searches for the Vandal Caught on Camera

The attack took place outside the church at 70-01 Kessel St. at approximately 3:30 a.m. A person can be seen in the video dragging the two statues 180 feet across 70th Avenue and repeatedly slamming them into the ground, causing them to break, police said.

The individual sought by police is described as a female in her mid-20s, with a medium complexion, medium build, and wearing all-black clothing.

7. Do yourself a favor and listen:

You’re not down in the dumps, are you? If so, give yourself a dose of Doreen. https://t.co/8GS4wk9eJ6

Unarmed and thinly clad before the heavily equipped agents of the government, they have bravely dared to ask for that shining thing they’ve been denied for so long: freedom. They often carry an image of Our Lady of Charity, the patroness of Cuba, before them. In solidarity, their brothers and sisters just miles away in Miami flooded Calle Ocho, the mainstreet of Little Havana, and filled the Miami shrine to the same lady with their fervent pleas.

9. Washington Post Editorial: After the Cuba protests, a regime shows its true colors

Communist police are using tear gas and arresting Cuban demonstrators, but the regime is facing an existential crisis reminiscent of 1989 in Eastern Europe and the open rebellion of people behind the Iron Curtain.

The painting, which read “Cuba Libre” (“Free Cuba”), was painted by the embassy as part of a demonstration against Cuba’s government and its violent treatment of political protesters. Activists drew inspiration from the Black Lives Matter movement, whose slogan decorated the road in front of the White House for months.

14. Erika Bachiochi: Reclaiming a Lost Vision of the Rights of Women

Something significant had changed over the intervening century in the cause of women’s rights. And it was not only that participants to the more recent Women’s March arrived by bus rather than on horseback, or that the women marching were as educated and professionally competent as the men, impressive though these changes are. Rather, the underlying rationale for women’s rights—for civil and political freedom and equality as such—has shifted profoundly. But this shift has occurred subtly and over time, such that many now falsely assume that an unbroken line can be traced from those who today agitate for women’s rights to those who argued that women had the right to do so in the first place.

Indeed, the philosophical and political principle of equal citizenship for women has morphed in the last half century into something that nearly contradicts its original moral vision, a vision first fully articulated by English philosopher Mary Wollstonecraft in A Vindication of the Rights of Woman more than two centuries ago. For Wollstonecraft, political freedom and legal equality were not ends in themselves but necessary means to higher human ends: the common human pursuit of intellectual and moral excellence.

The political and civil rights Wollstonecraft claimed for women in the late eighteenth century have been over time and with great struggle steadily secured in modern democracies around the world. And yet the ennobling moral vision upon which she built her rights claims has largely been abandoned. With the stark moral failures of so many of our political, economic, and cultural leaders, the sexual exploitation of women and children through pornography and sex trafficking, the relentless violence that increasingly targets the most vulnerable human beings, the abject poverty of so many even amid ever-growing wealth, and the materialism and consumerism that works to corrupt the soul of the West, Wollstonecraft’s substantive vision may be needed now more than ever.

The American Booksellers Association apologized Wednesday for a “terrible” and “serious, violent incident.” What dastardly offense did it commit? The profound trauma occurred this month when the trade group dedicated to selling books sent out a paperback copy of a book some of its members don’t like.

The book at issue is “Irreversible Damage: The Transgender Craze Seducing Our Daughters,” by Abigail Shrier. It argues, as Ms. Shrier explained in these pages last year, “that transgender identification among teen girls has become a social contagion,” and that medical intervention for teenage girls with sudden-onset gender dysphoria can cause serious and permanent harm.

Ms. Shrier supports medical gender transitions for adults and opposes discrimination against trans individuals. Her justifiable concern is with adolescent girls who have shown no childhood history of gender dysphoria, and who might later regret a decision that alters their bodies in fundamental ways.

Ms. Shrier’s book nonetheless offends the sensibilities of the woke left, which has tried to censor research into rapid-onset gender dysphoria and the regret felt by some who have undergone gender transitions. Twitter mobs are now leading a campaign to ensure that the public can’t buy or read Ms. Shrier’s book.

16. Alberta mom grateful after 11-year-old rescues her 5-year-old from pond: ‘He’s my angel’

“For an 11-year-old to do what he did — I have no words. I have so much gratitude, and so much praise and love,” Drake said.

17. Charles Camosy: Will those suffering late-stage dementia be the next to be called less than human?

In 2019, a New York Times story recounted the last days of Alma Shaver, a wife and mother who was sliding into the later stages of dementia. Her husband’s response was to shoot his wife in her sleep and then shoot himself.

The reporter did not describe this as a horrific murder-suicide or domestic violence built on ableism and male aggression. On the contrary, the author went out of her way to paint Alma’s husband as a sympathetic figure, strongly implying that the killing was justified.

We should not simply return children to their hectic prepandemic schedules.

“Someday you will be old enough to start reading fairy tales again.”-C.S. Lewis