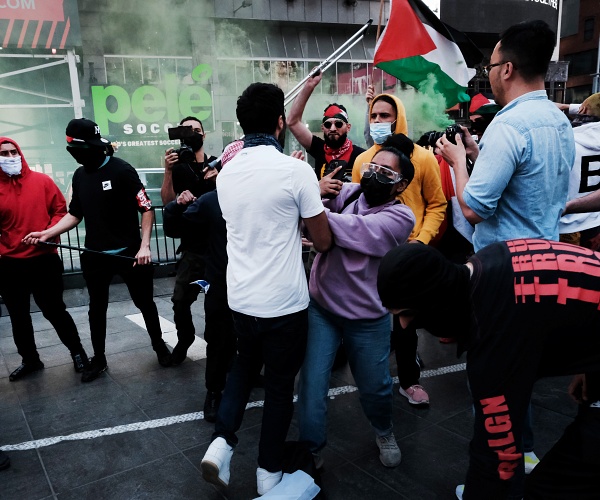 Two vets from the Israel Defense Forces seen in a viral skirmish with a crowd of pro-Palestinian protesters in New York City say the group of activists “threw the first punch” and lamented that “if Jews are afraid to walk in the city because they will be attacked, it’s not New York City anymore.”

The men spoke about the incident, part of which was caught on video and soon went viral on social media, to the Jewish News Syndicate. Amit Skornik told JNS that he and friend Snir Dayan brought an Israeli flag to wave in the city amid anti-Israel protests brought on by a violent conflict between the Jewish state and Palestinian terror group Hamas.

“We came on a motorcycle, and I told Snir [Dayan] in Hebrew to put the flag in the helmet so it won’t be seen cause they might destroy his bike,” Skornik said.

Dayan believes the pro-Palestinian protesters must have heard Skornik speaking Hebrew, because he says the two were soon confronted with roughly 30 activists, including a few ready to fight — though they likely didn’t know the pair were IDF veterans trained in Krav Maga self defense.

“They threw the first punch, and one big guy hit me in the chin,” Dayan, 27, told JNS. “I am happy first that they chose to attack people who were capable of defending themselves, and I’m happy I was with Amit, who knows how to defend himself. Had I been with a friend who wasn’t trained, it would have been a much different result.”

The two lamented the recent rise of anti-Semitic violence in American cities, including New York, where they’ve lived for the past five years.

“New York is the most diverse city in the world, we didn’t think this would happen here,” Dayan told JNS. “If Jews are afraid to walk in the city because they will be attacked, it’s not New York City anymore.”

Skornik, 26, said his grandfather was a renowned Krav Maga trainer in Israel.

“The first thing is ‘never give your back to your opponent,’ so we couldn’t run away,'” Skornik, 26, said of the Krav Maga teaching. “It’s a tactical mistake people make. The second thing was to make sure we didn’t get knocked to the ground no matter what. The third thing is to be calm in your mind, be super aggressive in your attack and throw punches to scare the attacker. Once they saw that we knew how to fight, only about six of them had the balls to come at us, while the bigger group was screaming behind them.”

Skornik added: “I’m a proud Jew and a proud Israeli. Nobody is gonna tell me I have to be afraid to walk in New York City.”

“I have a lot of appreciation for the New York City Police Department,” Dayan told JNS. “They don’t get the respect they deserve. But in this case, how do you let a guy push you, and you see him punch someone in the face and don’t arrest him? You just say ‘stop it?’ That’s assault.”

Dayan was arrested in the melee, he said, apparently the only person involved who ended up in cuffs.

“At the police station, there was a very nice NYPD officer who said, ‘We’re not trying to solve the world’s problems, we’re just trying to keep the city streets peaceful,'” Dayan told JNS. “I explained that we are not crazy. Two people are not going to attack 30 people with 500 more in the street. It was a case of self-defense and survival, and they realized that and let me go.”

Skornik said it was good for all involved that the NYPD arrived when it did.

“If not, a lot of them would have had broken bones and, as for us, I think we could have held them off for maybe five minutes — then I don’t know what would happen to us,” Skornik told JNS.