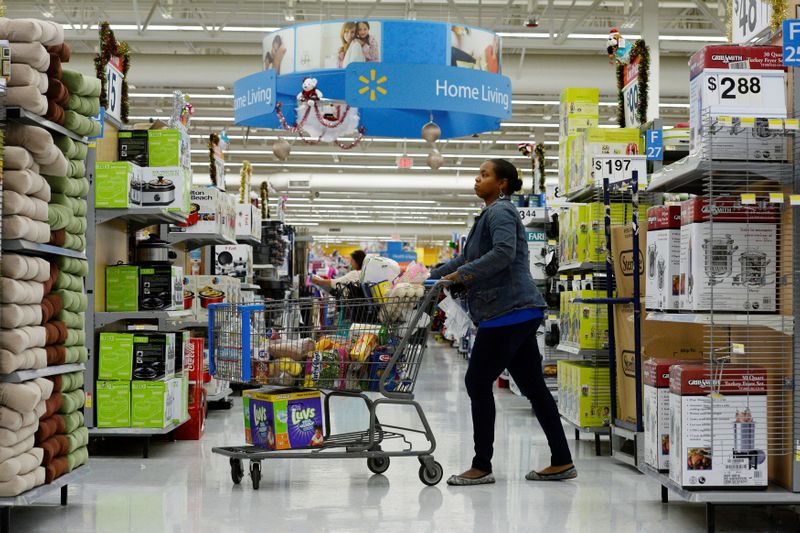 FILE PHOTO: A customer pushes her shopping cart through the aisles at a Walmart store in the Porter Ranch section of Los Angeles November 26, 2013. REUTERS/Kevork Djansezian

The survey from the Conference Board on Tuesday also showed a healthy appetite for long-lasting manufactured goods such as motor vehicles and household appliances, suggesting strong momentum in the economy as the second quarter ended.

Consumers were also keen to purchase homes, a sign that house prices will continue to rapidly increase as supply lags. Many intended to go on vacation, mostly in the United States, over the next six months, which should boost demand for services and add fuel to consumer spending.

“Consumers have plenty to be cheerful about after being cooped up at home for more than a year,” said Oren Klachkin, lead U.S. economist at Oxford Economics in New York. “Looking ahead, low COVID infections, rebounding employment, and elevated savings will buoy confidence and push consumers to spend at a breakneck pace over the summer.”

The Conference Board’s consumer confidence index raced to a reading of 127.3 this month, the highest level since February 2020, from 120.0 in May. Economists polled by Reuters had forecast the index at 119.0.

The survey places more emphasis on the labor market, which is steadily recovering. More than 150 million Americans have been fully vaccinated against the coronavirus, allowing for broader economic re-engagement.

Consumers’ inflation expectations over the next 12 months rose to 6.7% from 6.5% last month.

Stocks on Wall Street rose, with the S&P 500 hitting a record high for the fourth straight session. The dollar rose against a basket of currencies. U.S. Treasury prices were lower.

The Conference Board survey’s so-called labor market differential, derived from data on respondents’ views on whether jobs are plentiful or hard to get, vaulted to 43.5 in June. That was the highest level since 2000 and was up from 36.9 in May.

This measure closely correlates to the unemployment rate in the Labor Department’s closely watched employment report. The jump in the so-called labor market differential augurs well for June’s employment report due out on Friday. There are a record 9.3 million job openings.

“This could indicate one million new nonfarm payroll jobs in Friday’s report if the consumer is right,” said Chris Rupkey, chief economist at FWDBONDS in New York.

According a Reuters survey of economists, nonfarm payrolls likely increased by 690,000 jobs in June after rising 559,000 in May. The unemployment rate is forecast falling to 5.7% from 5.8%. Though job growth has picked up, a shortage of willing workers is frustrating companies’ efforts to ramp up hiring.

The worker shortage has been blamed on generous unemployment benefits, including a weekly $300 subsidy from the federal government. A lack of child care facilities as some centers which shut during the pandemic never reopened, is also keeping some parents home.

At least 26 states are terminating federal government-funded unemployment benefits before the Sept. 6 expiration date. This, together with school districts expected to resume in-person classes in the fall, is seen expanding the labor pool.

This month, more consumers planned to buy homes, cars and major household appliances over the next six months, relative to May. That suggests demand for so-called durable goods will remain strong even as spending shifts backs to services such as air travel, dining out and hotel accommodation.

Economists are forecasting another double-digit rise in consumer spending this quarter, which is expected to lead to the economy growing at about a 10% annualized rate. Gross domestic product expanded at a 6.4% pace in the first quarter.

Accelerating home prices are curbing sales, which will likely limit the housing market’s contribution to GDP growth this quarter. Demand for housing is being driven by historically low mortgage rates and shift to home offices during the pandemic. Other parts of the economy are also experiencing shortages and high prices because of bottlenecks in the supply chain.

A separate report on Tuesday showed the S&P/Case Shiller composite index of 20 metropolitan areas accelerated 14.9% year-on-year in April, the largest gain since December 2005. That followed a 13.4% increase in March.

Soaring house price inflation was corroborated by another report showing the Federal Housing Finance Agency (FHFA) house price index shot up a record 15.7% in April from a year ago after rising 14.0% in March.

Economists do not believe another housing bubble is developing as the surge is being mostly driven by a mismatch between supply and demand, rather than poor lending practices, which triggered the 2008 global financial crisis.

“We often get asked if we are in a housing bubble, but that is not necessarily the case,” said Jordan van Rijn, senior economist at the Credit Union National Association.

“There are structural factors at play, such as lower supply of existing homes, a shortage of materials and labor, and higher cost in materials.”