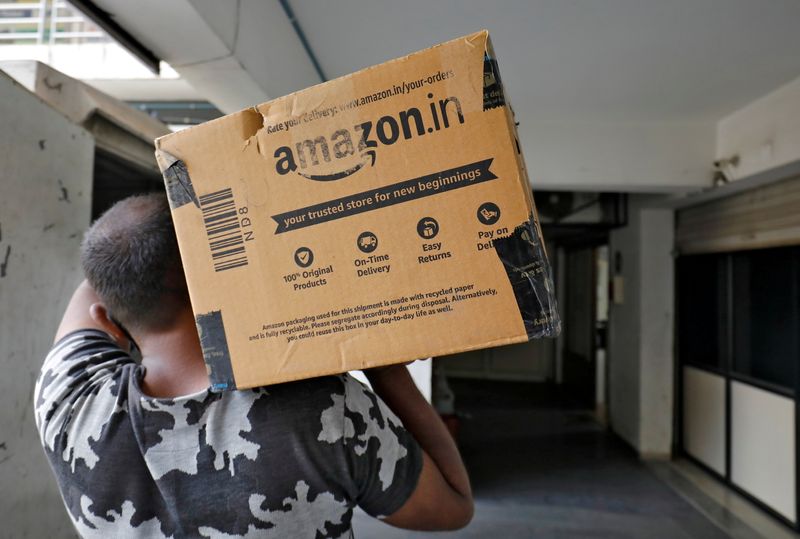 FILE PHOTO: A delivery worker carries an Amazon package to deliver it to a customer at a residential apartment in Ahmedabad, India, March 17, 2021.REUTERS/Amit Dave/File Photo

By Aditya Kalra and Abhirup Roy

NEW DELHI (Reuters) – A top lobby group that is part of the U.S. Chamber of Commerce believes India’s proposed new e-commerce rules are a cause for concern and will lead to a stringent operating environment for companies, according to an email reviewed by Reuters.

India this week spooked online retailers like Amazon and Walmart’s Flipkart by outlining plans to limit “flash sales”, reining in a private label push and mandating them to have a system to address grievances.

The Washington-headquartered U.S.-India Business Council (USIBC), of which Amazon and Walmart are members, described the rules as concerning in an internal email, saying some provisions were in line with New Delhi’s stance on other big digital companies.

USIBC has in the past urged India not to tighten a separate set of rules governing foreign investment https://www.reuters.com/business/retail-consumer/exclusive-us-lobby-group-urges-india-not-tighten-foreign-e-commerce-rules-2021-01-30 in companies like Amazon and Flipkart, an issue that has often soured trade relations between India and United States.

USIBC did not immediately respond to a request for comment.

The new rules – open for consultation until July 6 – are expected to have an impact across the board in an online retail market forecast to be worth $200 billion by 2026.

The companies deny any wrongdoing.

India’s new proposed rules have raised concerns they will force Amazon and Flipkart to review their business structures, industry sources and lawyers have told Reuters.

Amazon specifically holds an indirect stake in two of its top sellers and a Reuters investigation https://www.reuters.com/investigates/special-report/amazon-india-operation in February cited Amazon documents that showed it gave preferential treatment to a small number of its sellers.

India’s rules also will force e-commerce companies to reveal the country of origin of a product and suggest alternatives to ensure a “fair opportunity for domestic goods”.

Some of the new provisions align with India’s similar federal policies “for social and digital media companies … and will result in a more stringent e-commerce regime,” USIBC said in its email.