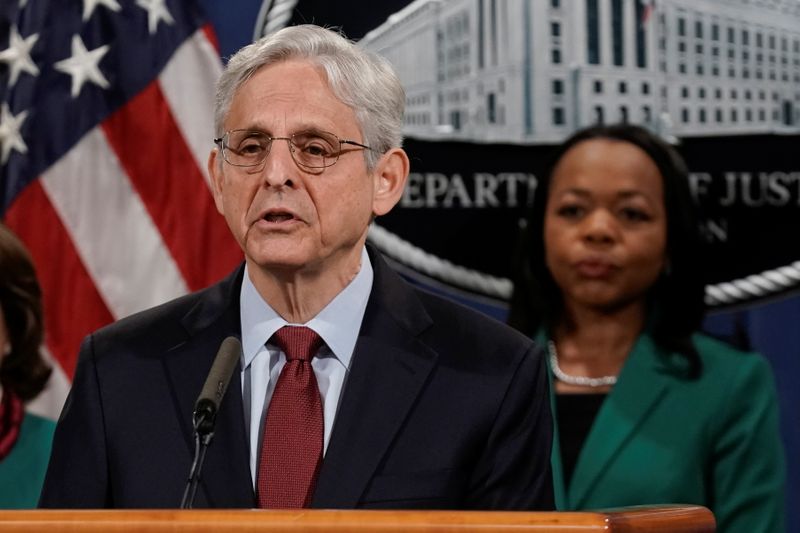 WASHINGTON (Reuters) -The U.S. Justice Department will file a lawsuit on Friday challenging a Georgia election law that imposes new limits on voting, saying that it infringes on the rights of Black voters, Attorney General Merrick Garland said.

The Georgia law, which also bans the distribution of water or food to people waiting on long lines at polling places, is one of a wave of new measures https://www.reuters.com/world/us/republicans-erect-voting-barriers-across-number-politically-crucial-us-states-2021-06-15 passed by Republican-controlled state legislatures this year, fueled by former President Donald Trump’s false claims that his November election defeat was the result of widespread fraud.

“This lawsuit is the first of many steps we are taking to ensure that all eligible voters can cast a vote,” Garland told a news conference. “We are scrutinizing new laws that seek to curb voter access and when we see violations of federal law, we will act.”

The lawsuit is the first of many actions the department plans to protect Americans’ right to vote, Garland said. It will also be offering new guidance on post-election audits, following a wave of challenges to the results of the 2020 supporters by Trump supporters, and issue the FBI and federal prosecutors new directions to prosecute threats to election workers.

After a sweeping Democratic-sponsored bill aimed at protecting access to the ballot died on a party-line vote https://www.reuters.com/world/us/democrats-voting-rights-plan-faces-long-odds-us-senate-2021-06-22 in the Senate this week, President Joe Biden vowed to take other steps to protect voting rights.

The Republican governors of Arizona, Florida and Iowa have also signed new voting restrictions this year, while state legislatures in Pennsylvania and Texas are trying to advance similar measures.

The Georgia law, signed by Governor Brian Kemp on March 25, tightened absentee ballot identification requirements, restricted ballot drop-box use and allowed a Republican-controlled state agency to take over local voting operations. The state was a key battleground in the 2020 presidential election.

Trump repeatedly sought to pressure election officials in Georgia after losing the state to Biden. In a phone call to the secretary of state, Trump asked him to “find” the votes that would be needed to overturn his election loss.

He also pressured the Justice Department to oust the U.S. Attorney in the Atlanta region. His actions are now under investigation by Fulton County District Attorney Fani Willis.