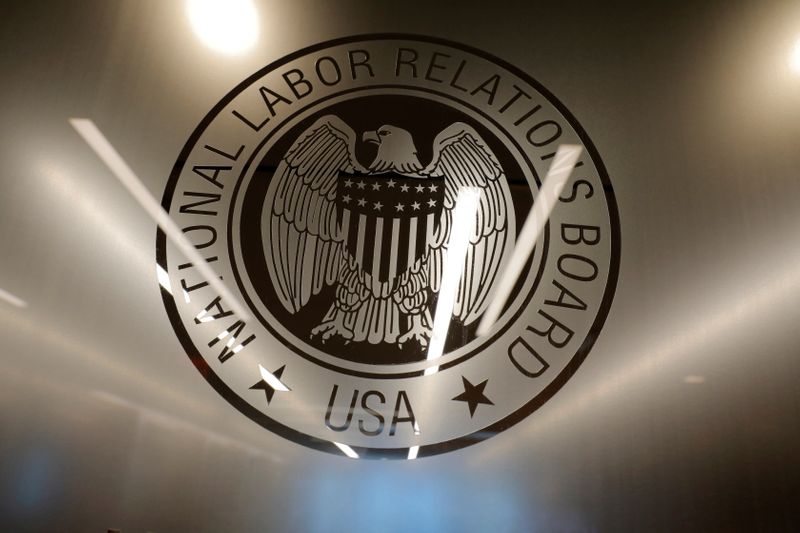 FILE PHOTO: The seal of the National Labor Relations Board (NLRB) is seen at their headquarters in Washington, D.C., U.S., May 14, 2021. REUTERS/Andrew Kelly/File Photo

By Daniel Wiessner and David Shepardson

WASHINGTON (Reuters) – The U.S. Senate on Wednesday confirmed union lawyers Gwynne Wilcox and David Prouty to seats on the National Labor Relations Board, paving the way for a Democratic majority that is likely to reverse a series of employer-friendly Trump-era decisions.

The Democrat-led Senate voted 52-47 to approve the nomination of Wilcox, a partner at Levy Ratner in New York, and 53-46 to confirm Prouty, the general counsel of New York City service worker union SEIU 32BJ.

A White House spokesperson hailed the confirmations and said Biden has “made it a priority to appoint members to the NLRB who will protect worker organizing, collective bargaining, and workers’ rights to engage in concerted activity.”

Wilcox will fill a vacant seat with a term expiring in August 2023. Prouty will serve a five-year term beginning next month, when Republican William Emanuel’s term ends.

The Senate last week voted 51-50 to confirm https://www.reuters.com/legal/transactional/vp-breaks-tie-bidens-pick-nlrb-general-counsel-2021-07-21 Jennifer Abruzzo, a career NLRB attorney who more recently worked for the Communication Workers of America union, to serve as the board’s general counsel. Biden fired Trump-era GC Peter Robb on his first day in office in January.

Wilcox and Prouty did not immediately respond to requests for comment.

Wilcox has worked on a series of high-profile cases in her decades-long career, including a major recent NLRB case accusing McDonald’s https://www.reuters.com/article/employment-mcdonalds/mcdonalds-intervenes-to-defend-joint-liability-settlement-amid-shakeup-in-nlrb-leadership-idUSL1N2LK275 of retaliating against franchise workers who participated in an organizing campaign.

Prouty was previously general counsel of the union UNITE HERE and served as a senior lawyer for the Major League Baseball Players Association from 2008 through 2017, when he joined SEIU 32BJ. The union represents about 175,000 workers in New York City.

Biden’s nominations https://www.reuters.com/legal/transactional/unions-hail-nomination-high-profile-labor-lawyer-nlrb-2021-05-27 of Wilcox and Prouty were hailed by the country’s largest labor unions, who said their deep experience, including Wilcox’s stint as an NLRB field attorney, made them uniquely prepared to tackle challenges faced by workers.

But Republicans, who have criticized the changes Biden has made at the board as showing favoritism to unions over workers, have expressed concerns https://www.reuters.com/legal/transactional/republicans-call-nlrb-dol-nominees-very-troublesome-2021-07-15 about the NLRB nominees’ union ties and progressive records.