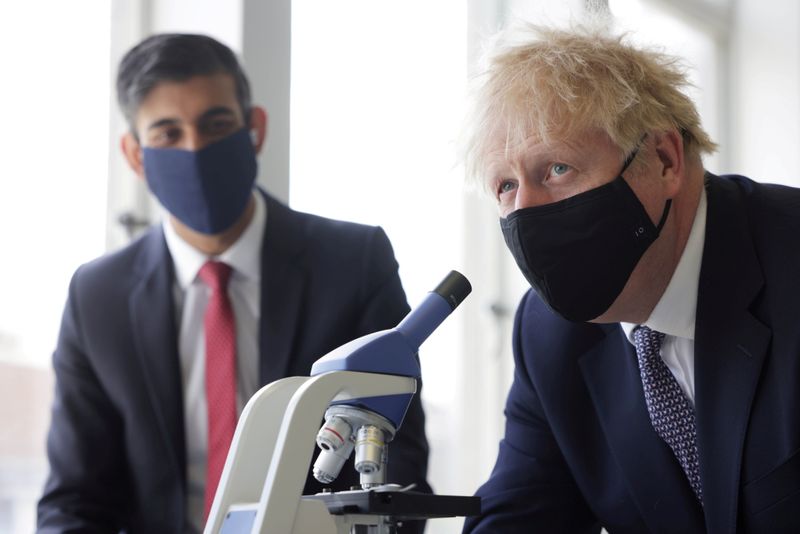 LONDON (Reuters) – British Prime Minister Boris Johnson and his finance minister Rishi Sunak will be limited to working from their offices and subject to daily COVID-19 testing after being identified as a contact of someone who tested positive for the virus.

Health minister Sajid Javid on Saturday said he had tested positive for COVID-19.

“The Prime Minister and Chancellor have been contacted by NHS Test and Trace as contacts of someone who has tested positive for COVID,” a statement from Johnson’s Downing Street office said on Sunday.

Typically, anyone identified as a contact by the tracing scheme would be required by law to self isolate for 10 days.

However, the government’s two most senior ministers will instead take part in a pilot study that allows them to continue working from their offices, and only self-isolate when not working.

Britain will remove almost all its remaining coronavirus restrictions on Monday, even as the country faces a new wave of COVID-19 cases. Minister argue that the vaccination programme has largely broken the link between cases and mortality.

The surge in cases is causing problems for employers though, with more than half a million people told to self isolate in the week to July 7 because they had been exposed to the virus.

The pilot scheme that exempts Johnson and Sunak is currently running in 20 workplaces, including transport and immigration infrastructure, and eligibility is assessed on a case by case basis.

The study is designed to look at whether daily contact testing is an effective way of identifying new cases and whether it has any impact on transmission of the virus.

In mid-August, Britain plans to change its rules on self isolation to exempt those who have been double vaccinated from the requirement to stay at home for 10 days.