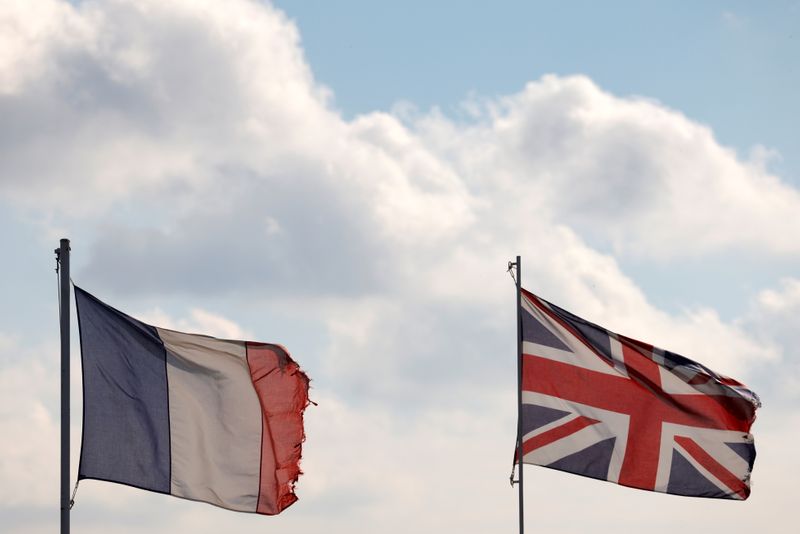 A French flag and a British national flag, known as the Union Jack, are seen in Violaines, France, October 16, 2020. REUTERS/Pascal Rossignol

LONDON (Reuters) – Britain said on Friday that it was scrapping a planned easing of coronavirus rules for travellers from France, which had been due to take effect on Monday, because of the continued presence of the Beta variant of COVID first identified in South Africa.

Anyone arriving from France will have to quarantine at home or in other accommodation for five to 10 days, even if they are fully vaccinated against COVID, Britain’s health ministry said.

This quarantine requirement will end as planned on Monday for fully vaccinated travellers from other countries in Britain’s ‘amber’ category of coronavirus risk, which includes most of Europe. Just over two thirds of British adults are fully vaccinated.

Monday sees the end of the majority of coronavirus rules in England, including most legal obligations to wear masks. But foreign travel will remain subject to quarantine and testing requirements.

“With restrictions lifting on Monday across the country, we will do everything we can to ensure international travel is conducted as safely as possible, and protect our borders from the threat of variants,” health minister Sajid Javid said.

Before the coronavirus pandemic, France was Britain’s second-most popular travel destination after Spain, and the news comes just a week before school holidays start in England, when millions would typically seek to cross the Channel.

The change drew an angry reaction from global airline body IATA, which said Britain’s travel restrictions and short-notice changes were out of line with those elsewhere in the world.

“The UK is entrenching itself as an outlier in its confused approach to travel. This, in turn, is destroying its own travel sector and the thousands of jobs that rely on it,” Willie Walsh, director-general of the International Air Transport Association (IATA), told Reuters.

Truck drivers will continue to be exempt from the quarantine requirement, but it will affect most other travellers, including those transiting through France from elsewhere in Europe.

Britain is currently reporting around 10 times as many COVID cases as France, due to the rapid spread of the Delta variant of COVID first identified in India, but has few cases of the Beta variant found in France.

Quarantine for arrivals from France was “a precautionary measure … while we continue to assess the latest data and track prevalence of the Beta variant,” Britain’s health ministry said.