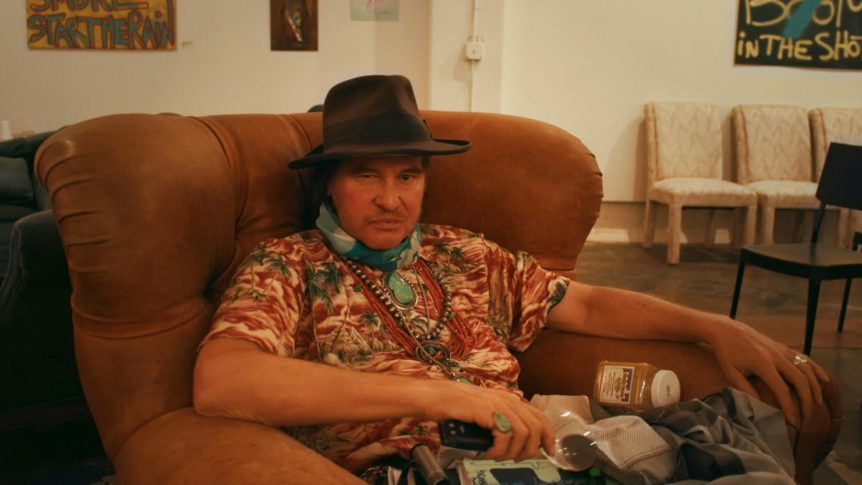 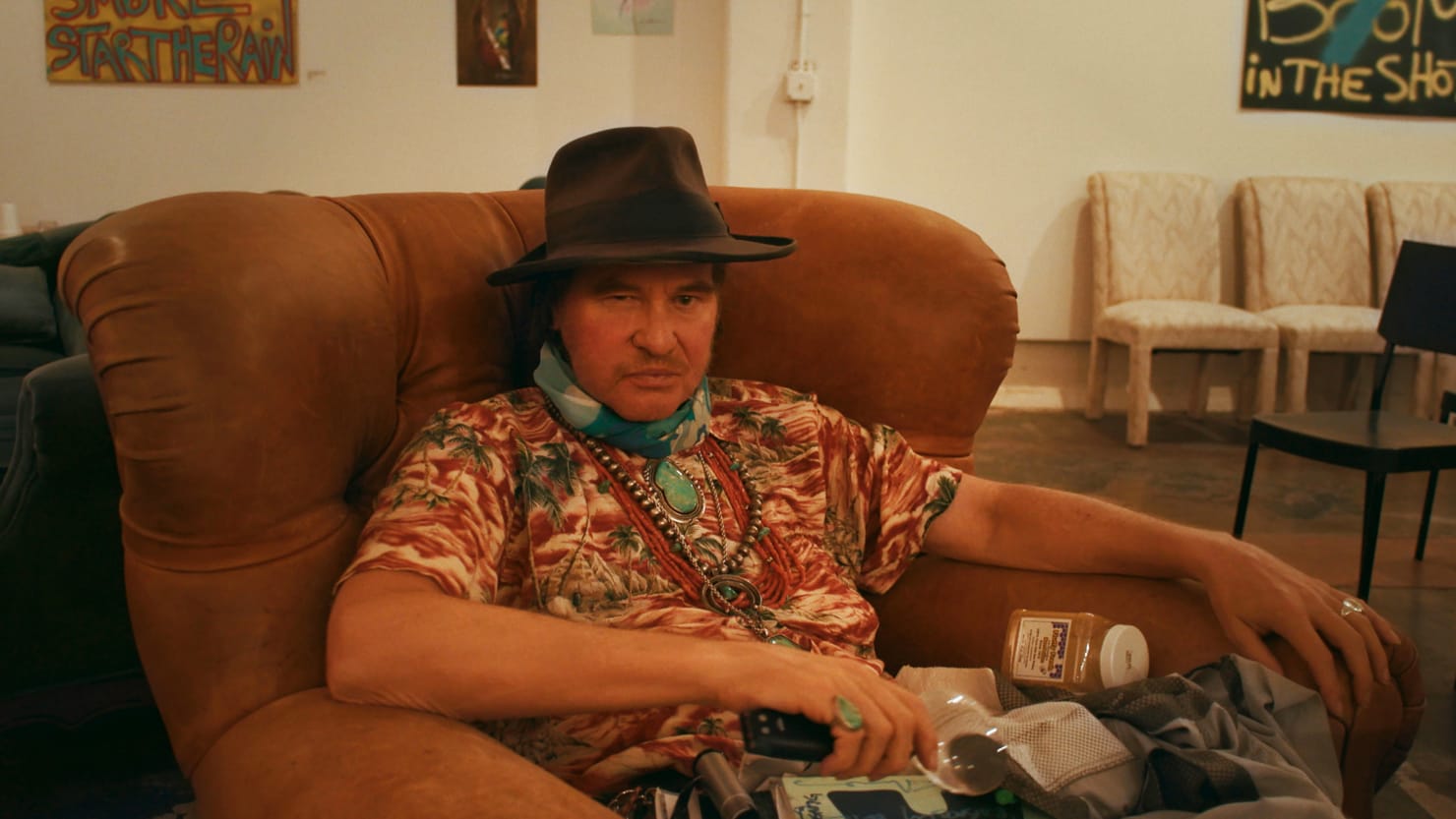 Handsome, muscular, cocky and charismatic, Val Kilmer was a prototypical movie star, so it’s somewhat shocking to now see him in such reduced form in Val. Speaking in a gravely rasp via a tracheotomy tube through which he also eats—the byproduct of throat cancer treatment in 2017—and boasting a scrawny frame that’s light years removed from his six-pack heyday, the 61-year-old Kilmer is a withered version of his former matinee idol self, at least physically. Yet despite those health setbacks, he remains a vibrant artist determined to not fade away, and Ting Poo and Leo Scott’s documentary serves as the blockbuster actor’s vehicle for telling his story—and, in the process, reasserting his voice.

In theaters July 23 before arriving on Amazon Prime Video on August 6 (this following its premiere at the Cannes Film Festival), Val is a semi-autobiographical effort, mixing contemporary scenes of Kilmer at home and with his children, and a wealth of camcorder footage that the actor shot during the past 40 years. That intimate material is the real draw, offering behind-the-scenes peeks at some of his most famous movies, including Top Secret, Top Gun, The Doors, Batman Forever, Heat, Tombstone and The Island of Dr. Moreau, the last of which includes perhaps the juiciest of all clips, with Kilmer and director John Frankenheimer having a heated on-set argument about the former’s unwillingness to turn off his VHS camera and the latter’s threats to quit in protest over his star’s insubordination. It’s a confrontation that confirms Kilmer’s reputation as a “difficult” actor, which itself is subsequently addressed by a montage of interviews and TV broadcasts from that late 1990s period in his career.

Blessed with amazing material from Kilmer’s present and past, Val is often an unvarnished portrait of the actor. At a Comic-Con signing, the now-frail Kilmer has to take a break from doling out autographs so he can puke in a trash can and be steered in a wheelchair (with a blanket over his head) to a room so he can take a nap. In 1997, he argues with his ex-wife Joanne Whalley about custody arrangements for their two children, Mercedes and Jack, promising to make their ongoing disagreement a legal squabble should she not cooperate. At a Tombstone anniversary screening, Kilmer vocalizes his struggle between feeling like a sell-out for traveling around the country hawking his prior self to the masses, and being grateful for (rather than humiliated at) the outpouring of love and support he receives at such events. In those moments, the film captures a raw and poignant sense of its subject’s many ups and downs, both then and now.

Val doesn’t shy away from Kilmer’s current medical travails, which have forced him to communicate by placing a finger over the open hole in this throat. Kilmer is so difficult to understand that Poo and Scott subtitle everything he says, and his son Jack provides the proceedings’ first-person narration (written by Kilmer). In that commentary, Kilmer opens up not only about his fears about his post-cancer professional prospects, but about the traumas that have shaped his life—most pressingly, the death of his beloved aspiring-filmmaker brother Wesley at the age of 15 (from an epileptic seizure-related drowning), and his complicated relationship with his divorced mother and father (who financially screwed Kilmer with a series of shady real estate deals). Also detailing his upbringing in an unconventional Hollywood family—and a childhood spent living on Roy Rogers’ old ranch—Kilmer confronts these highs and lows with moving frankness.

“Despite those health setbacks, he remains a vibrant artist determined to not fade away.”

What Val gains from having access to Kilmer and his treasure trove of self-shot movies, however, it loses in critical depth. Kilmer routinely mentions the importance of his Christian Science faith, but its actual role in his life and career—and his questionable approach to treating his cancer—is left largely unexamined. The same goes for his method acting approach and his demanding and ornery reputation, which are mentioned and depicted and yet hardly investigated in a substantial manner. The film seems determined to touch upon relevant topics without digging into them, so that we understand how and when certain incidents and developments played out, but not why.

In an old interview, Kilmer muses on his inability to reconcile the fact that, on the one hand, he’s had a wonderful Hollywood run about which he can’t complain, and on the other, his big-ticket roles haven’t provided him with the serious acting opportunities he always coveted. The notion that Kilmer was a potentially great thespian whose career was somewhat derailed by superstardom is a tantalizing one that Val doesn’t—and perhaps can’t—really explore, since Kilmer himself isn’t interested or willing to fully go there. Thus, Poo and Scott’s documentary proves both revealing and opaque, hinting at answers and ideas that it can’t genuinely wrestle with from its up-close-and-personal perspective.

Still, even if it’s more superficial than it initially appears, Val is an artfully constructed non-fiction affair, employing a scrapbook aesthetic that vacillates between recent and archival footage of Kilmer, as well as numerous snippets of his most notable performances. In home movies of him poking fun at his The Island of Dr. Moreau co-star Marlon Brando, scenes of him playing Mark Twain in his play Citizen Twain, and new sequences in which he and Jack dress up as the Dark Knight and Boy Wonder (which are set to his ruminations on the disconnect between his dream of being Batman and the drearier reality of playing him in a tentpole extravaganza), Kilmer’s humor shines through. There’s a winning playfulness to Val, however much it’s tempered by tragedy and grief, and that’s wholly the result of Kilmer’s indefatigable spirit.

Early on, Kilmer muses that Shakespeare sought, with Hamlet, to capture everlasting truths about people via dramatic and performative illusion. In a certain sense, Val attempts a non-fiction variation on that same venture, showing us how Kilmer’s life was reflected through his art—and how we can see our own universal struggles through his highly personal triumphs and travails. It doesn’t get under its subject’s skin enough to truly succeed in that endeavor, but it’s nonetheless a noble—and frequently affecting—work of excavation.