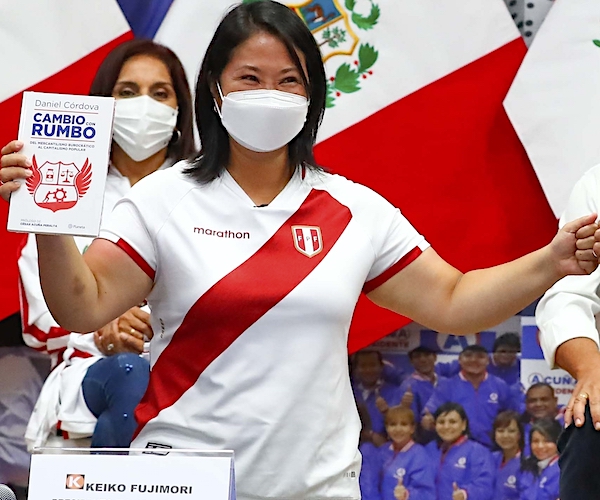 With 24 hours to go before Peru elects a new president, few — if any — observers are predicting a winner in the hard-fought race between leftist Pedro Castillo and conservative Keiko Fujimori.

Two months after Castillo led Keiko in the initial candidate race by 19% to 13%, she has been gaining momentum in the runoff. This is due, in part, to her support from many on the right who opposed her in the past because of her controversial father but now see her as the nation’s sole roadblock to socialism.

One of those supporters is Nobel laureate and acclaimed novelist Mario Vargas Llosa, who lost a bitter 1990 election to the elder Fujimori but now clear fears Castillo more.

Washington and many world capitals are watching the contest closely, in part because international investors in Peru fear Castillo’s vow to change the constitution to give the state greater power, tax a largest share of profits from mining firms, and, in his words, “nationalize the Camisea Gas project, the gold, the silver, the uranium, the copper, the lithium that has just been handed to other countries.”

“Castillo is very dangerous and his Number Two, Vladimir Cerrón, is tied to the far-left throughout Latin America and the world,” Joseph Humire, executive director of the Center for a Secure Free Society, told Newsmax. “And he is associated with the narcoterrorist group Shining Path. There are also distant but continuing ties to Iran, Bolivia, and Cuba.”

Shortly after the initial voting, Vargas Llosa endorsed Keiko Fujimori as “the lesser of two evils” and warned a Castillo presidency would leave Peru “with all the characteristics of a communist society.”

Convinced Keiko Fujimori would give Peru “more possibilities of saving our democracy,” the novelist also warned she would have to respect democracy and presidential term limits, and rule out a pardon for her father’s former “fixer” and spymaster Vladimiro Montesinos.

(Keiko has already said she would pardon her father, who is 83, in failing health, and serving a 25-year death sentence for corruption and authorizing death squads while president).

Vargas Llosa’s blessing of Keiko Fujimori would have been considered unthinkable before the contest with Castillo.

In his book “A Fish In the Water” about his presidential campaign, Vargas Llosa describes opponent Fujimori in withering terms — noting unkind comments he made that his wife plays no role in his political career and he read word-for-word from briefing books in their debates.

After President Fujimori declared martial law in Peru, Vargas Llosa repeatedly denounced him from abroad and warned during Keiko’s two previous bids for the presidency that she would extend a dynasty he regarded as corrupt.

“Keiko certainly has a chance to beat Castillo, but it all depends upon turnout,” Daniel Runde of the Center for Strategic and International Studies, told us. “Castillo is popular with his rural base, whereas Keiko tends to have support with urban Peruvians.

“It is important to note that neither candidate received more than 20% in the first round of voting, and there remains a high-level of apathy among the electorate, which increasingly doesn’t identify with any political party.”

John Gizzi is chief political columnist and White House correspondent for Newsmax. For more of his reports, Go Here Now.