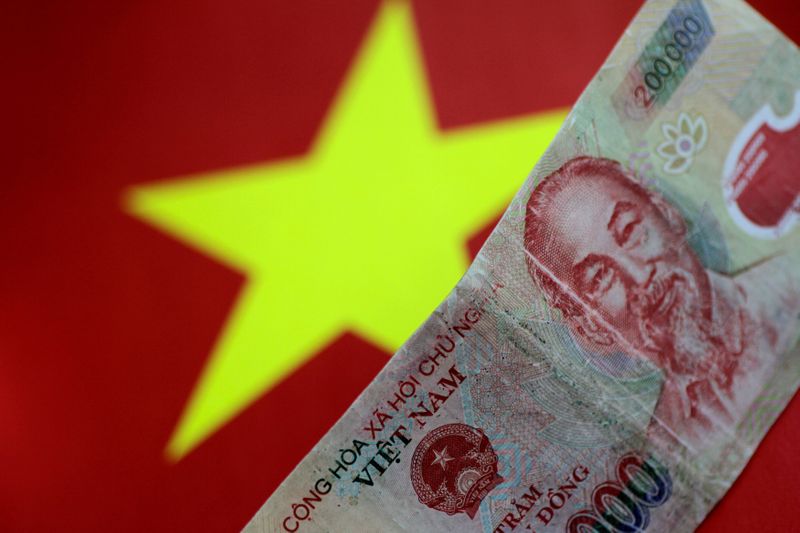 FILE PHOTO: A Vietnam Dong note is seen in this illustration photo May 31, 2017. REUTERS/Thomas White/Illustration/File Photo

By David Lawder and Lisa Lambert

WASHINGTON (Reuters) -Vietnam has pledged not to deliberately weaken its dong currency to gain an export advantage, reaching an agreement with the U.S. Treasury to refrain from “competitive devaluation” and make its monetary and exchange rate policies more transparent.

The agreement, announced in a joint statement by Treasury Secretary Janet Yellen and State Bank of Vietnam Governor Nguyen Thi Hong after a virtual meeting on Monday, follows months of U.S. pressure on Vietnam over its currency practices and ballooning U.S. trade surplus.

The Trump administration in its final weeks had declared Vietnam a currency manipulator and had threatened to impose punitive tariffs on imports from Vietnam.

Vietnam, which benefited from the shift of U.S. supply chains away from China amid a tariff war, saw its goods trade surplus with the United State jump 25% in 2020 to $69.7 billion despite the COVID-19 pandemic. Vietnam is a growing source of U.S. imports of furniture, electronics, computers and apparel.

In the joint statement, Vietnam confirmed its commitment under International Monetary Fund rules “to avoid manipulating its exchange rate in order to prevent effective balance of payments adjustment or to gain an unfair competitive advantage and will refrain from any competitive devaluation of the Vietnamese dong.”

The Vietnamese central bank said the focus of its monetary policy framework is “to promote macroeconomic stability and to control inflation.”

But the central bank agreed to “improve exchange rate flexibility over time,” allowing the dong to move in line with the development of the country’s markets and economic fundamentals, and to further modernize and make more transparent its monetary policy and exchange rate framework

The Treasury said it would inform other U.S. government agencies about the agreement to address U.S. concerns.

“I believe the State Bank of Vietnam’s attention to these issues over time not only will address Treasury’s concerns, but also will support the further development of Vietnam’s financial markets and enhance its macroeconomic and financial resilience,” Yellen said in the statement.

The Treasury under Yellen in April removed a “currency manipulator” label from Vietnam that had been imposed by the Trump administration last December. But the Treasury said that Vietnam, along with Taiwan and Switzerland, had tripped its thresholds for the designation under a 2015 law.

The department at the time said it would commence “enhanced engagement” with Hanoi to correct the situation, which led Vietnam’s foreign currency intervention and global current account surplus to exceed 2% of its GDP.

U.S. Trade Representative Katherine Tai said her agency will monitor Hanoi’s implementation of the agreement and would work with Vietnam “to ensure that it addresses the acts, policies and practices related to the valuation of its currency that were found actionable in the Section 301 investigation.”

USTR’s probe had found that Vietnam was taking “unreasonable” actions to push down the value of its currency to make its exports cheaper, but held off on imposing tariffs.