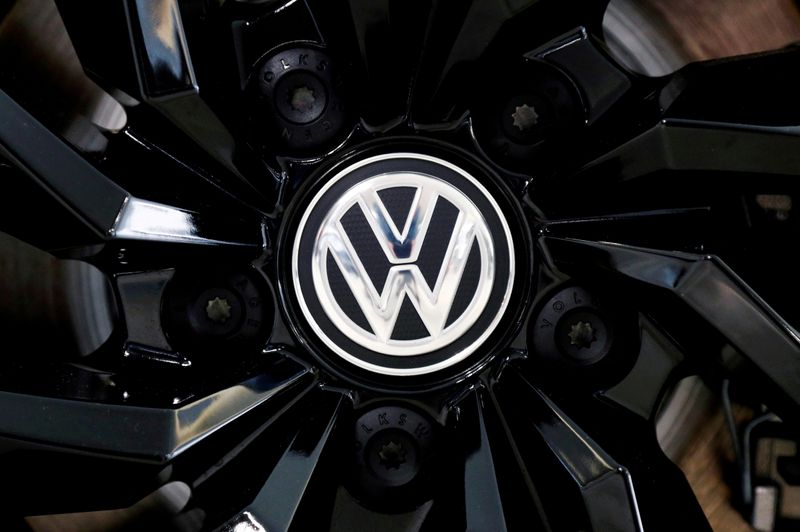 FILE PHOTO: The logo of German carmaker Volkswagen is seen on a rim cap in a showroom of a Volkswagen car dealer in Brussels, Belgium July 9, 2020. REUTERS/Francois Lenoir

FRANKFURT (Reuters) -Europe’s largest carmaker Volkswagen on Thursday raised its profit margin target for the second time in less than three months, pointing to record earnings in the first six months of 2021 that came in above pre-pandemic levels.

The company said it now expected an operating return on sales of 6.0-7.5%, having previously guided for 5.5-7%. First-half operating profit before special items reached 11.4 billion euros ($13.5 billion), above the 10 billion euros achieved in 2019, before the coronavirus pandemic wreaked havoc in the global economy.

“We’re keeping up our high pace, both operationally and strategically. The record result in the first half of the year is clear proof of how strong our brands are and how attractive their products are,” Chief Executive Herbert Diess said in a statement.

The news comes a day after the carmaker, along with partners, launched a tender offer for French-listed Europcar that values the car rental firm at 2.9 billion euros ($3.4 billion).

Volkswagen also lowered the outlook for deliveries to customers, now expecting them to be up noticeably in 2021 as an ongoing shortage of crucial semiconductors will be felt mostly in the second half of the year.