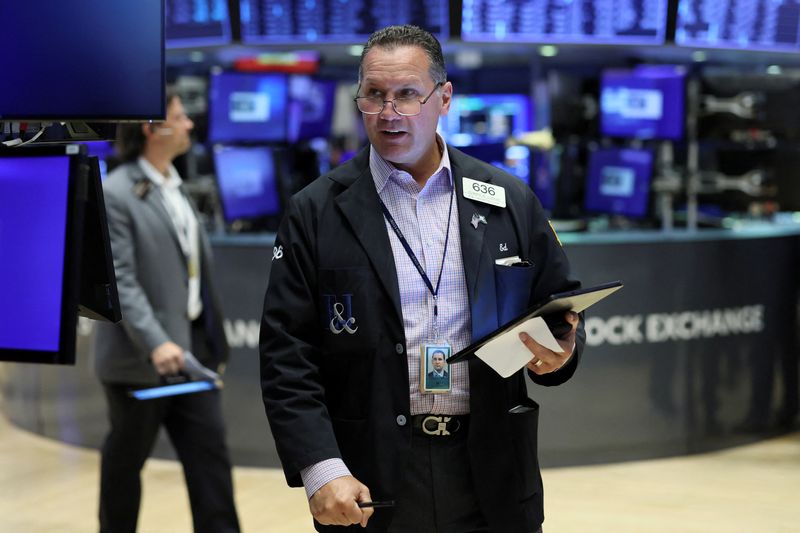 (Reuters) -Wall Street’s main indexes slipped in choppy trade on Friday as investors digested a mixed jobs report that had lifted hopes of the Federal Reserve shifting to smaller rate hikes in the future.

The S&P 500 and the Nasdaq each rose as much as 2% after a closely watched report showed an uptick in the unemployment rate in October, pointing to some cooling in the labor market that could give the Fed cover to reduce the size of its rate hikes from December.

However, the non-farm payrolls report also showed average hourly earnings rose 0.4% in October against a forecast of 0.3%, while job growth was stronger than expected.

“You’ve got a real battle here between the bulls and the bears,” said Dennis Dick, market structure analyst and trader at Triple D Trading.

“The bears are saying the Fed is not going to pivot till data starts coming in not as hot, (while) the bulls are saying that a lot of this bearishness is all priced in.”

The report was a key focus area for markets after hawkish comments from Fed Chair Jerome Powell on Wednesday spurred fears that the central bank could keep raising borrowing costs for longer than previously expected.

Megacap technology firms Alphabet and Microsoft rose 1.8% and 1.6% respectively in volatile trade, while the energy sector, which was rallying earlier, cut gains and was last up 0.1%.

“You’re seeing a lot of rotation happening and what that does is (add) to a lot of choppiness in the market,” Dick said.

The non-farm payrolls report comes on the heels of a conflicting set of data which, while pointing to a slowdown in certain pockets of the economy, has highlighted resilience in labor demand in the United States despite the Fed’s aggressive policy moves to control inflation.

Traders’ bets of a 75 basis point rate hike in December had briefly spiked after the jobs report but are now split between odds of a 50 bps and 75 bps increase.

Market focus will now turn to a key inflation reading due next week as well as U.S. midterm elections on Nov. 8, where control of Congress is at stake.

“The market prefers a divided government, and looks like that’s where we’re headed. It certainly stops some policies that could be damaging the economy,” said Mace McCain, chief investment officer of Frost Investment Advisors.

Meanwhile, hopes of an easing in China’s tough COVID-19 curbs supported some areas of the market,with U.S.-listed shares of Chinese companies including Alibaba, JD.com and Baidu gaining between 5% and 9%.

The materials sector rose 2.0% and was the biggest gainer among S&P 500 sectors.