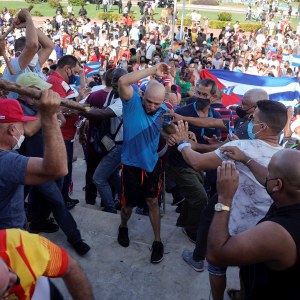 You probably know people who will never admit to any personal failings or mistakes. Whatever goes wrong is always someone else’s fault.

There are plenty of people like that when it comes to their philosophical beliefs. Now that there is a mass uprising against the regime in Cuba, we are being treated to the predictable blame-shifting.

One excuse being offered is that the U.S. enforces a trade embargo against Cuba. Here’s how Carden responds:

I think the embargo is a terrible idea that should be lifted immediately, as it has given Cuban communists a convenient scapegoat for their country’s problems. The embargo, however, is not what causes Cuba’s woes, and people blaming the embargo overlook the fact that Cuba trades pretty extensively with the rest of the world–how else do you think Canadian and Mexican merchants get the Cuban cigars they hawk to American tourists? It’s not because a Cuban Rhett Butler is smuggling them past a blockade. It’s because Cuba trades freely with the entire world. I suspect the US embargo hasn’t really hurt Cuba that much more than the “transgender bathroom” boycott hurt Target.

The advocates of socialism, many of whom reside comfortably on the faculties of American colleges, continually insist that the world’s next experiment in government economic planning will be the one that leads to the promised land. It’s time for the rest of us to say, “No, it can’t work and you don’t get to try it in the U.S.”