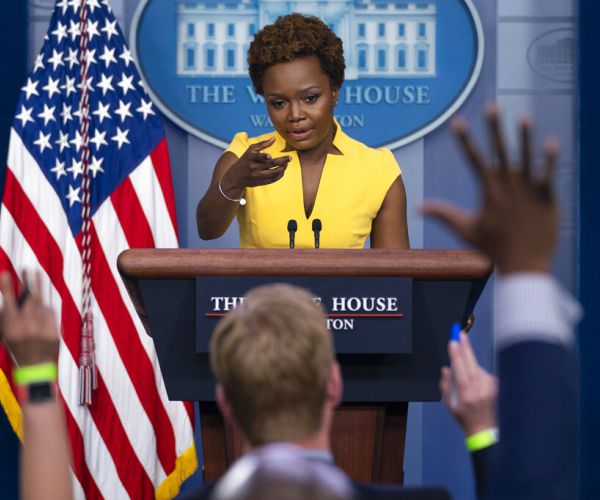 The White House on Wednesday avoided a question about possible punishments China would face if the country lies or refuses to cooperate with President Joe Biden’s recently announced investigation into the origins of COVID-19.

Associated Press reporter Zeke Miller asked White House deputy press secretary Karine Jean-Pierre about the potential consequences China would face if the review finds that the country was complicit or dishonest about the cause of the COVID-19 pandemic, or if Beijing refuses to cooperate with the inquiry.

She also repeatedly refused to say if China will face any kind of penalty if it doesn’t cooperate or what conclusions the intelligence community is leaning towards, according to Politico.

Biden in a statement Wednrsday said the U.S. intelligence community is divided between two conclusions when it comes to the origins of COVID-19.

The president noted that he ordered the U.S. intelligence community to prepare a report on the origins of the virus, “including whether it emerged from human contact with an infected animal or from a laboratory accident. I received that report earlier this month, and asked for additional follow-up. As of today, the U.S. Intelligence Community has ‘coalesced around two likely scenarios’ but has not reached a definitive conclusion on this question. Here is their current position: ‘while two elements in the IC leans toward the former scenario and one leans more toward the latter – each with low or moderate confidence – the majority of elements do not believe there is sufficient information to assess one to be more likely than the other.’”

Biden said he asked the intelligence community to continue their review, and has “asked for areas of further inquiry that may be required, including specific questions for China. I have also asked that this effort include work by our National Labs and other agencies of our government to augment the Intelligence Community’s efforts. And I have asked the Intelligence Community to keep Congress fully apprised of its work.”

The president concluded: “The United States will also keep working with like-minded partners around the world to press China to participate in a full, transparent, evidence-based international investigation and to provide access to all relevant data and evidence.”