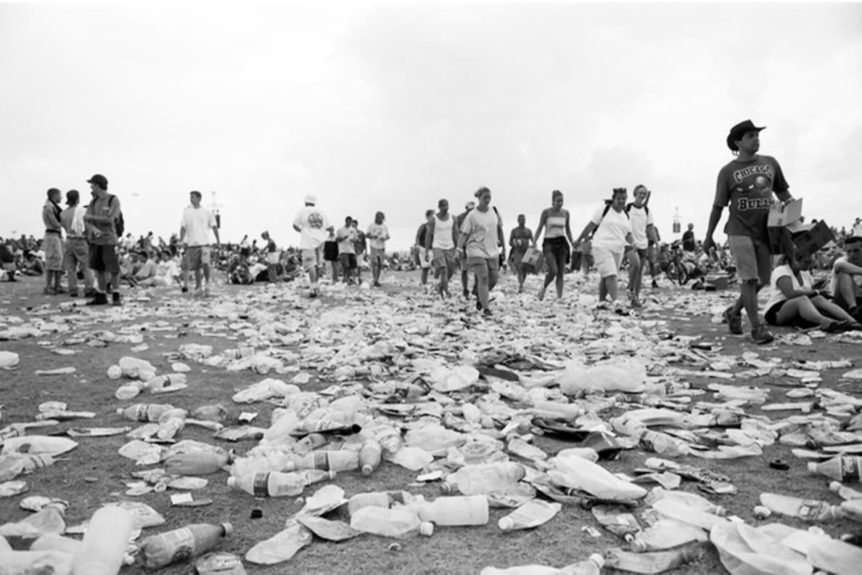 Limp Bizkit’s Fred Durst was the embodiment of late-’90s aggro dudebro ugliness, and his band’s riot-instigating performance at Woodstock ’99—the second revitalization of the festival brand by co-founder Michael Lang and producer John Scher, following Woodstock ’94—took the brunt of the blame for the event’s devolution into violent, misogynistic bedlam. The new documentary series Woodstock ’99: Peace, Love, and Rage doesn’t let Durst and his Limp Bizkit cohorts off the hook, and Scher in particular eventually points the finger squarely at the red-capped frontman for most of what transpired over three July days in Rome, New York. Yet director Garret Price’s film, thankfully, isn’t that narrow-sighted. Instead, it shrewdly casts Durst and his fellow musicians less as causes for the chaos that erupted than as catalytic expressions of a simmering rage bubbling up in American culture at the time—a fury that the festival itself both deliberately and accidentally stoked.

Part of HBO’s new “Music Box” series created by Bill Simmons, Woodstock ’99: Peace, Love, and Rage (July 23) views its subject as a disaster preordained by a combination of poor planning, commercial exploitation, and tipping-point youthful disaffection. What began as a nostalgia-infused event marked by the hottest rock acts of the day—Limp Bizkit, Korn, The Offspring, Metallica, the Red Hot Chili Peppers—turned sour and fetid quickly, thanks to extreme heat, overflowing sewerage systems, and a lack of water. When Limp Bizkit took the stage on night two and encouraged the largely white, male and furious crowd to bounce along to “Break Stuff,” the effect was that of a bomb going off. And in that incident’s aftermath, the festival transformed into a veritable Lord of the Flies conflagration in which attendees set bonfires, looted merchandise and food stands, and smashed everything in sight.

Lang states that, with Woodstock ’99, he and Scher sought to give that young-adult generation something which felt contemporary and, for better or worse, “that’s what contemporary was.” Woodstock ’99: Peace, Love, and Rage doesn’t completely disagree, positioning Limp Bizkit as a symptom of a dangerous malaise in America at the turn of the millennium. That atmosphere, Price contends, was the byproduct of numerous factors: fears of Y2K; the Bill Clinton/Monica Lewinsky scandal; the Columbine school shooting massacre (which had taken place three months beforehand), and the rise of trash media and the ensuing coarsening of American culture (Girls Gone Wild and magazines like Maxim and FHM get lambasted here). It was an era, the film contends, that was rampant with anger and sexist objectification, having already replaced the progressive spirit of the early-’90s Grunge moment with a general neanderthal crudeness.

Woodstock ’99: Peace, Love, and Rage thus does, to a degree, prove Lang’s point that the festival was a pitch-perfect reflection of the times, as well as the music scene circa 1999, when MTV was pitting bubblegum pop against lunkheaded nü-metal (which Moby correctly opines “embraced the troglodyte elements” of traditional heavy metal). Nonetheless, Lang and Scher receive most of the film’s censure for the catastrophe that unfolded. Set at an Air Force base rife with scorching asphalt, it was a blisteringly hot affair where water was scarce, plumbing and sanitation facilities collapsed, and security was performed by untrained kids who couldn’t, and often didn’t want to, enforce the rules. The result could only be a fiasco, especially when, according to journalist Steven Hyden, the promoters assumed that the magic of the Woodstock brand would, as it had in the past, compensate for an absence of basic logistical and safety measures.

“What began as a nostalgia-infused event marked by the hottest rock acts of the day turned sour and fetid quickly, thanks to extreme heat, overflowing sewage systems, and a lack of water.”

Not that such magic ever really existed in the first place; multiple speakers in Woodstock ’99: Peace, Love, and Rage provide a corrective to the mythology of the ’69 festival, reminding viewers that, alongside the peace and love of that seminal counterculture classic, there was rampant filth, military intervention to provide desperately needed supplies, and death. In that context, Woodstock ’99 comes across as an extreme version of an inevitability, fueled by music acts that skewed heavily toward the hard rock side and mounting frustration with high prices for the water needed to stave off the dehydration and hypothermia plaguing the 400,000+ in attendance.

Catering directly to an entitled frat boy-ish audience—only three women were on the bill: Jewel, Sheryl Crow, and Alanis Morissette, one for each day—and then giving those individuals free rein to act out their at-wits-end worst impulses, Woodstock ’99 sowed the seeds of its own demise, and Price’s doc details the many ways mismanagement led to tragedies. Those included multiple sexual assaults that were so obvious that The Offspring frontman Dexter Holland castigated fans for groping topless crowd-surfers during their set, as well as fatalities, including that of Dave DeRosia, who perished from hyperthermia while listening to Metallica in a scarily gargantuan mosh pit. DeRosia’s experience, recounted via his own journal entries and an interview with his friend, is merely one of many horror stories from that weekend, and the film’s raft of talking heads—including Spin’s Maureen Callahan, MTV’s Carson Daly and Dave Holmes, and musicians like Korn’s Jonathan Davis, Megadeth’s Dave Mustaine, and Jewel—both convey the terror and insanity of the festival, and examine the underlying reasons for its downfall.

The conclusion drawn by Woodstock ’99: Peace, Love, and Rage is that Lang and Scher should have seen this calamity coming and that their simultaneous incompetence and desire to profit from angry-white-dude trends begat ruin. To be sure, many of the bill’s acts recklessly played to the audience’s pent-up angst—for example, the Red Hot Chili Peppers covering Jimi Hendrix’s “Fire” as bonfires blazed all around was willfully irresponsible. But ultimately, it makes the case that Lang and Scher bit off more than they could chew, amassing a titanic crowd that could never be properly governed, and then screwing them over and leaving them to their own destructive devices. Although maybe that imprudence shouldn’t be so surprising, given that when asked about the rapes that occurred under his festival watch, Scher—in the most thoughtless comment about the entire endeavor—says that the men who committed those crimes were wrong, but the “women that were running around naked were at least partially to blame for that.”